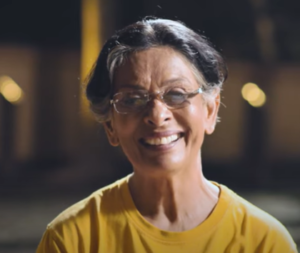 After few years, the family moved to Monaragala due to numerous political disagreements. Her father was a theatre actor who performed in stage dramas such as Barrister Hamu and Hingana Kolla. Her first marriage was celebrated in 1979 and lasted for twelve years, where she married again to a plantation owner in 1991. With the catastrophe of her second marriage, she faced various encounters having unforgettable periods.

.Her acting prowess she had acquired via hereditary affiliations and innate aptitudes. Anoja when  in grade 9, she had acted in the play “Anduren Eliyata”en Eliyata produced by Newton Gunaratne and Yoga Balasuriya teachers in Mahanama College, Moneragala. Anoja had first come to the screen with a trivial character in Yasapalitha Nanayakkara’s  film Tak Tik Tuk. Her first main role was portrayed in film Surangi of Yasapalitha’s film Monarathenna. She performed a role in the Australian film ‘Island’ in 1989.

With her aptitude was clearly defined when she was selected to portray dual roles in film Maldeniye Simieone. which became her rotating point in her career. For these roles, she was adjudicated as the “Best Supporting Actress” at the 11th New Delhi International Film Festival. Thereafter she recognized herself in prolific manner in the 1980s in Sinhala cinema, made her mark in popular cinema in the film “Obata Diwura Kiyannam”. Her abundant of popular roles in 1980s came through films as Araliya Mal, Channayi Kello Dennayi, Peraḷikārayō, Mamayi Rajā, Sināsenna Raththaran and Yukthiyaṭa Væḍa. These portrayals paved the way for to clinch the Best Actress award at Sarasaviya film festival, Presidential, OCIC and Swarnasanka awards for her performances in creative films such as Kelimadala, Gurugedara, Surabidena, Julietge Bhumikawa, Muhudu Lihini, Seilama, Siri Medura and Janelaya.

Anoja rose to admiration in cinema and acclaim after winning the Silver Peacock award for the Best Actress at the New Delhi International Film Festival in1987 for the film Maldeniye Simion, directed by Dr.DB Nihalsinghe produced by Vijaya Ramanayake for Tharanga Films. This was the first time a Sri Lankan actress had won a best actress award at an International film festival. Subsequently she went on to LAMDA in London to further enhance her skills winning further accolades, nationally and internationally. She has been honored with the Kohinoor Award by the Governor of Tamil Nadu, Government of Sri Lanka’s Kala Suri national award, the Asian Film Center tribute in 1994, Munich International Film Festival retrospectives of her films, and the state governments of Kerala and West Bengal displays of her films are among the many accolades she was acknowledged.

Apart from Sinhala films, Anoja had portrayed a leading role in the Australian film ‘Island’ directed by Paul Cox. She had also acted in Pakistani Urdu films like Raththathin Rath Thame, IndoLanka  co-production films Hum Se Na Takrana, Agar Tum Na Hote, Suraj Bhi Tamasha, Miss Lanka, Naadani, and Do Haath. After that, she studied music, acting and voice training at the London Academy of Music and Dramatic Art (Lamda) in London. After her return to Sri Lanka, she started the ‘Advanced Performing Arts Institute’ in the adjoining land belonging to the Bellanwila Rajamaha Vihara temple.

Had won many awards locally, regionally, and internationally. Presidential special award for Muhudu Lihini in 1985,same year Sarasaviya award for Hithawathiya, Presidential merit award,in1986 Sarasaviya Merit award for Mihidum Salu, Best actress state award, also best costume design, Sarasaviya award best film Obata Divura Kiyannaam,1987 best actress Sarasaviya Maldeniye Simion. Also at OCIC and Presidential award,in 1987 Rajatha Mayura award,best actress in 11th Indian International film festival.For teledrama awarded as best television actress Thaara Devu 1987,Kalasuri award,Honour award. Was adjuducated as the Woman of the year 1987 Vanitha award at Rotary International club.In year 1990 won best actress award at Sarasaviya for Sirimedura in the same year Koinor Rathna award,in 1991 Vanitha award for most popular actress,also in 1992 Sarasaviya award ,OCIC award for Kelimadala,1994 Sarasaviya award for Surabidena, Presidential award also for best actress for Gurugedera, Best actress in 1994 Swarna Sankha award for Surabidena.In year 2005 awarded the Fringee First award at Edinburgh drama festival in year 2005 for producing Children of the sea,also for the same production awarded at Tap Water award at the same awards ceremony. In year 2006 Anoja had been once again adjudicated as the best actress in the state awards ceremony for her role in Diriya Mawa Saha Ege Daruwa From the above it is clear that she had been carrying away most awards during her film career that spanned for over three decades from 1979 to 2014 acting in about seventy five films .She had been obviously a sought-after character actress had been most busy portraying vivid roles in the decade of 1990.

In year 2006 award winning Anoja performed the lead in Henry Jayasena’s landmark Sinhala adaptation of Bertolt Brecht’s pivotal anti war drama “Mother Courage and her Children” with a cast largely comprising of tsunami effected youth held initially at the Lionel Wendt portraying the role of ‘Mother Courage” a clever cunning canteen woman in the Swedish army determined to make a living from the war.This play was directed by Sue Weston her drama teacher at LAMDA, produced under the banner of Anoja Weerasinghe’s “Abhina academy of Performing Arts.The Abhina foundation was opened in year 2005 helped to run a series of psycho-social drama workshops, where the veteran actress and her group toured all parts of the island, running theatre-based workshops for those traumatized by disaster and conflict. Workshops were held in the South, East and West of Sri Lanka at 10 centres which drew crowds of children and youth, who were given productive tools with which to deal with loss, grief, trauma, and anger through drama, showing them a road to inner healing and peace through drama therapy and performance art, effectively giving them purification through theatre.

Anoja’s ‘Abhina’  Ashramaya is located in close proximity to the Bellanwila bird sanctuary in a picturesque serene environment. The mission is essentially to spread peace ,good health and joy through Yoga.  Many may think that Yoga is all about physical poses. Not really, the entirety of Yoga includes a wide range of meditative and self-corrective rituals, such as meditation, humming, mantra, prayer, breath work, ritual, even selfless act.The word “yoga” comes from the root word “yuj,” which means  “to bind.” The word itself has numerous meanings, from a forecasting combining to marriage, with the underlying theme being connection. Yoga is extremely beneficial to our overall well-being in greater depth improving flexibility for ageing personnel which has proved by worldwide surveys improving stress relief, mental health, reduce inflammation. The chronic inflammation may cause heart decease, diabetes and other illnesses are caused by prolonged inflammation; Yoga helps immensely to navigate over them.

Anoja conducts teacher training classes ,online classes for walking meditation, Yoga and Dhanawantari for healing voice with the assistance of trained personnel.The demand to enter to the Ashramaya is very high. After the duration of a course new batches are recruited. So many who had successfully followed the courses speaks high of the services and benefits accrued by the activities at the Ashramaya.