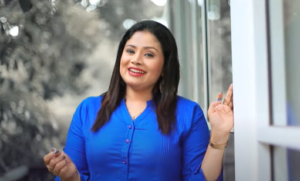 Amila Nadeeshani is a prodigious well-known vocalist who is devoted to her craft, who had worked incredibly hard learning it at National Youth Services Center , music academy in Ratnapura. Amila is a singer who was willing to sacrifice abundantly. For her to become the accomplished vocalist she has had possessed the passion for the craft, voice care, desire to improve, enunciation, time commitment, controlled breathing ,restraint and her own inimitable signature singing style. Amila had been able to invest the effort into a proper learning curve how to sing initially following initially the legendary singer Angeline Gunatilleke.It is learnt that from her native Kiriella she had when in her very young age had gone in search of music shops that sold cassettes of famous Angeline Gunatilleke whom she had adored and of course endeavored to imitate. Her father hailing from a lower middle class family was an owner of a small ‘garage’ who from his meagre earnings spent on Amila’s education in purchasing the needed school books and novels which she loved to read.Amila recalls a pathetic story when she was dropped at the MD Gunasena book shop had asked her to select her books until her father returned from Panchikawatta.She has had experienced this practice many times before.After having chosen all her school books and some novels she liked to read had waited for her father.Unlike the other days he had got unusually late.She had sat with the books next to the cashier until he arrivesd.On arrival he had said his purse was pickpocketed. Amila had then no option but to leave the books and return by bus home more or less crying.

Her father was a person who could sing well.That should be the reason Amila too is able to sing having acquired singing skills via hereditary affiliations. His ambition was to make Amila a  reputed singer at any cost , however he had died before she climbed to stardom after the birth of her son. Amila had quipped in the media that she is very persevering ,for any task she never gives up does the maximum possible to navigate to meet with success. For Amila in studies,singing or sports or whatever she is seriously devoted.In her school Kiriella Central College In Kiriella she had taken part in athletics had been the best school athlete. As her determination was always existent had become the runner up in All Island school’s 800 metres event. Apart from singing she was interested in literature , she had a passion to read,She succeeded as per her wish to author a novel”  nala karaliya” as her debut novel which she   confessed the first publication is all sold out but contemplating on publishing the second publication and also on her second novel.Amila is a person determined to accept challenges.From her small days owing to the humble beginnings she had been seriously contemplating on some means of earning money as she really wanted to lead a more comfortable life.

It was Amila’s father who had instigated her to take part in Sirasa Super Star Season 2 in year 2007 which of course was a grueling reality show the first of its kind which was the second year in succession Sirasa TV launched. With her innate talent hereditary affiliated from father she was determined to excel. She was selected among the beat 12 out of thousands of applicants later she was adjudicated by the panel of judges and the SMS voting to be the second runner up.This was the beginning of her long unblemished career to date.She had confessed that it was this reality show of Sirasa Super Star which paved the way for her present dignified position as an acclaimed vocalist.The authorities of the Sirasa television gave her a boost for her future in giving her a role in a teledrama “Hiru Male” almost subsequently. Amila at this juncture was receiving accolades ,invitations to sing in concerts locally and internationally  which could be termed during that tenure as a ‘sought after’ artiste.Then she was selected to sing in films too as she possessed an ideal screen voice,

During discussions in the television media she was  blamed and accused for singing songs of popular yesteryear female artistes. To this accusation she did say to a certain extent the accusations are true but by singing them she is able to resurface the old songs which are more or less buried which is of course a very good thing for our music. She said that though she sings many songs of Angeline Gunatilleke even when she was confronted she never  said anything , hence why the general public lament on it. Amila did say that now she has over fifty of her own songs and she sings mostly those at musical shows but on request she has to sing songs of the singers like Angeline Gunatilleke, Anula Bulathsinhala etc,Amila however never forgets to remind of her humble beginnings.

Amila Is very often invited to sing in musical concerts all over the Island apart from overseas concerts.She appears on invitation on all television channels as a sought after vocalist like copy chat,chat n music, hitha Illanana Tharu,Sihinayaki Re where she sings admirably sans any flaw winning the hearts of millions of viewers, After female vocalists like Nirosha, Samitha, Shashika, etc she is held in high esteem among the artistes who emerged in the year 2000 decade.

Thus one of her own first song was recorded and launched in year 2013  “Seda Thuhire” for the lyrics of Sheshan Galahitiyawa and to the  music of Sudath Nawalage a reputed musician to date. Among all her songs she recollects the last recorded as “Anthima Thathpare” which is very popular already. Her official music video launched in year 2020 was “Adare Adare” lyrics by Ramani Rajapaksa and music composition of Dr RNG Rajapaksa. Then her song ‘Lengathukama” was also launched recently along with it Amila commenced in you tube termed “Unlimited Lengathukama “ a visit to Sudath Nawalage’s  residence who had invited her to lunch very willingly where the latter’s path in music to date and of the family was elaborated.Amila had done many albums ,what comes to mind are her albums “Wahi Pabalu’ and ‘Paramee.’ under the Maharaja Entertainments (pvt) label under the genre Indian film Pop and Pop. Then Amila recorded a cassette named ‘best of Amila Nadeeshani” song collection and super music nonstop.Some of the other songs on Mp3 recorded on sound Cloud  that comes to mind are Bopath Yuwalak, Dasaman, Sandawathyata,Meedum Wasanthe,Anaraditha Sulang,Kuda Deduru,Adam,Sihinayak Wela,Maha Polawe,Me rea etc.

After Amila’s Sirasa Super star triumph her father wanted her to pursue her music knowledge extensively had admitted her to the National Youth Service Centre music branch in Ratnapura.There she met her future husband Samantha a native of Embilipitiya  a music crazy yet a competent musician who had owned several bands also a member of the NYSC Thurunu Shakthi musical group in the NYSC Ratnapura. As a top musician able to play many instruments like guitar, drums.keyboard etc.The guy had fallen in love with beautiful Amila who had hesitated for a while. Amila at that juncture had organized her own solo music show. Samantha had rendered yeoman service voluntarily and helped in massive proportions to make the show a success.Amila than had known Samantha had truly loved her.The duo had got married when Amila was still a teenager.

Samantha had been a persevering type person just like Amila. Samantha has had an astute person who knew how to conduct any type of a business, music shows or whatever. The duo matched ideally as both had goals  jointly endeavored to rise in life which Amila had been dreaming for to live a comfortable life. The duo owns three shops dealing with sarees and other imported ladies wear imported from India, Singapore etc They both travel separately to these destinations to fill the shops with modern stuff.The shops are housed in Wennapuwa, Embilpitiya and Borelesgamuwa.Amila in a recent discussion had added that the business and sales in the Wenappuwa shop is at a high ebb. As both are busy Amila had added that Samantha had bought her a new car as two cars are needed for them to hurdle over day to day challenges,

It has revealed that Amila had toured for concerts on her own as the two children the younger daughter was too small to look after sans both of them. The mother of Amila after the demise of her father lives with them and does most of the domestic stuffs.But lately as son is around nineteen years old an advanced level student at Thurstan College and daughter seven years old, the duo travel together for concerts abroad.There had been ‘gossip: about the Amila which were squashed by Amila saying this is typical in this country for various reasons ,jealousy takes pride of place. On this issue when this matter was questioned in a television confrontation Amila said the old saying “Abuddassa kala Labuth Thithai” need to be changed as ‘Labuth thiththa nehe” in today’s context.

Amila has added that for her she loves challenges and will make every endeavor with perseverance until she navigates over them successfullyThe two Samantha and Amila in life are both busy the duo attend to their tasks sharing jointly .She had confessed that even a bed sheet is washed to duo do together, There is more for them to achieve in the future.All would wish them that they will go from strength to strength and succeed in their planned tasks wishing the duo and children good health .Also wish Amila will keep audiences spellbound with pin drop silence with passion in singing to remain but not to diminish .

Sri Lanka rupee remains at 375 against the US dollar