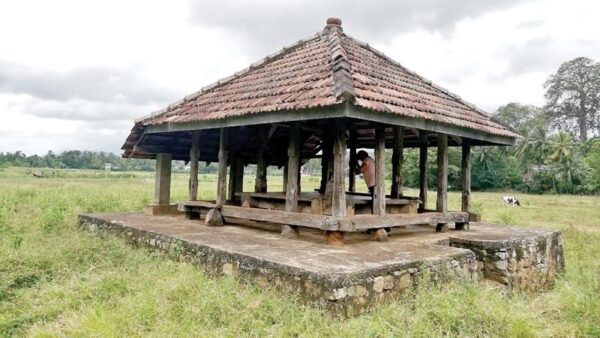 The need for a safe place for people who are going on long trips in ancient times to stay overnight was acute, as such trips were done on foot or in carts which usually took several days.

As a result, Ambalama had been built with the aim of preparing a place for the people to prepare food and spend the night. Most Ambalamas were built near a flowing stream. Otherwise, a large pot of clean water had been placed near the Ambalama.

According to the teachings of the Buddha, the construction of Ambalamas is considered as a noble deed. Therefore, in the past, the villagers who have come together to build temples, shrines, roads, canals and bridges for the benefit of the people, had also commenced building Ambalamas.

Their size, beauty or value had been determined by the wealth of the villagers who contributed to its construction. In some cases, the aristocratic families had even used their personal wealth to build Ambalamas for charity.

In the early days the Ambalama was built only to provide accommodation, but later they were built for various other purposes as well. Accordingly, the folklore contains information about Ambalamas built to connect the cities and to hold meetings of the villagers. 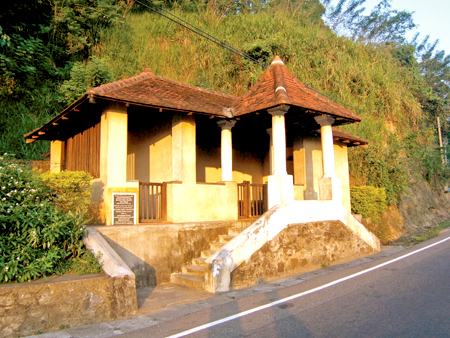 Although the Ambalama had been used indiscriminately in many cases, the study of history shows that some Ambalamas had been built based on a specific group of people.

An example of such an Ambalama is the Matale Kumbiyangoda Ambalama. A room in the centre of the Ambalama is separated by a wall, which is considered to be a section reserved for women. Also, the Ambalama at Daulagaha Junction had been built on a similar ethnic basis, but today it is used by the people without any discrimination.

No specific person has been assigned to build the Ambalama, and no Ambalama is identical in shape, design, or size. It is clear that the Ambalama had been built with the labour and creativity of the villagers without a definite plan and state patronage.

The logs, which are often used as the foundation for them, are kept slightly above ground level to protect them not only from termites and insects, but also to make it easier for the people to sit and sleep on it.Most of the Ambalamas look square and did not require a timber-made point to support the roof. Instead, a clay tower had been placed on top of the roof which, in most cases, is four-cornered.

In addition to this, various other methods had also been used to build Ambalamas, the most notable of which is the placement of the roof on stone or brick pillars.

The walls are not very high around the Ambalama and wide and thick wooden boards have been placed on the walls. Whether the roof of the Ambalama was made of straw, coconut twigs or tiles depended on the wealth of the villagers.

Before building the Ambalama, it had been important to choose a suitable place for it. Those who built an Ambalama often choose a place that provides maximum convenience. For this reason, most Ambalamas had been built near a well, a stream or a paddy field.

Information about the early Ambalamas is revealed in an inscription built during the reign of King Mahasen.

It mentions a lodge called Mahawata Wathussala near a main street.

Archaeologists are still struggling to gather enough evidence before reaching the final conclusions about the location of the Ambalamas which had been built near the Vijayarama and Alapathwewa temples in Anuradhapura.

The Ambalama is also mentioned in Sandesha poems. The 15th century Salalihini Sandesha contains information about an Ambalama on the road from Kotte to Kelaniya and the Gira Sandesha describes those who gathered at the Welithota Ambalama.

The Ambalama mentioned in the 18th century Neelakobo Sandeshaya had been located in a village in the Southern Province. Its walls are said to have had paintings of lions and tigers.

The Diyasavul Sandesha published in 1813 contains information about an Ambalama which was to be built near a paddy field close to Deduru Oya. Similarly, in 1681, Robert Knox wrote in his diary that when having a break, the Sinhalese used to gather at places called Ambalama to hold political discussions.