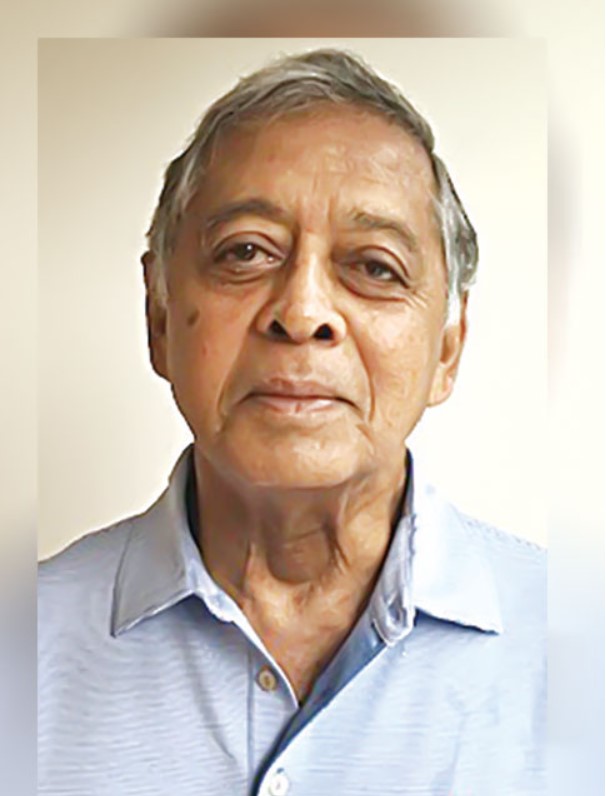 Vijaya Chandrasoma, a not infrequent contributor to these pages, has published a selected compilation of his articles, adding an autobiographical section on his own life which the reader will see has had its many ups and downs. A wry sense of humour and an ability for self-deprecation in the pages dealing with his personal life makes the book a delight to read; not only because of his writing talent and ability to tell a good story, no doubt inherited from his father, M. Chandrasoma, a highly reputed Civil Servant from a previous age; but also that he’s had a most interesting life both in Sri Lanka where he was born, schooled and grew up, an interlude in the UK and thereafter in the USA where he emigrated in his middle years and lived for 20 years before returning home alone to ride out the last lap of his self-proclaimed “dissolute life.”

I have known Vicky, as he is known to both friends and family, from my boyhood. We lived in the same Kollupitiya neighbourhood and our fathers both belonged to the once much coveted Ceylon Civil Service, which they both prematurely quit for somewhat similar reasons. We were also distantly related from my mother’s side and I remember her calling Vicky’s father Tissa aiya, while my siblings and I called Chandrasoma Tissa mama, though there was not much social interaction between our two families.

The biographical section of the book, of which only a very limited edition has been published, was very much an afterthought. What was first intended to be an anthology of some of the articles he wrote for the newspaper had been expanded to include other material.

The author says in his preface that during the period of intense boredom brought about by the pandemic lockdowns, he thought about compiling a selection of his newspaper articles “and then got the notion to include something about my life, leaving out, of course, many parts that are best left unsaid.”

The title of the book “All Show and No Substance – A Cautionary Tale” is an example of the writer’s previously mentioned penchant (talent?) for self-deprecation. Few writers of autobiographies relish showing themselves in an uncomplimentary light. But Chandrasoma is an exception who freely admits his culpability for a failed marriage, which produced three high-achieving children, and for much else that went wrong in his life.

Vicky says he wrote the book primarily for his two grandchildren, Annika and Rohan, “that they may learn something about the life and times of their grandfather and the world in which he lived.”  It may even come as some sort of handy manual, he believes, providing guidance on coping with the ‘slings and arrows of outrageous fortune’ that will inevitably come their way in the future.

Vicky’s father published a book of letters to his grandchildren, a generation earlier. These were brilliant expositions of this country, its culture and its religion, perhaps mostly meant for those of his grandchildren growing up abroad, cut away from the motherland.

But to get away from the author to the book itself, apart from the ‘peep show’ section which will no doubt appeal to the curiosity for which Lankans are notorious, there are some very readable snippets from Vicky’s life, including a section on a spell at Christ Church, Oxford, where he was ‘rusticated’ (“which is slightly better than being sent down”) and did not graduate, much to the disappointment of his parents.

Of his failure to obtain a first degree in Britain, despite the assistance he received from Gamini Goonasena, the famous cricketer then handling educational affairs at the Ceylon High Commission in London, Chandrasoma says: “Perhaps I can claim a Sri Lankan, if not a world record of having secured places at three of the finest universities in the world, Oxford, Cambridge and St. Andrew’s, and ending my academic career without a first degree. My father said I would regret this failure for the rest of my life, and he was right. I do, to this day.  More than anything, I regret I did not give my parents the pride of seeing their son graduating from the most prestigious university in the world.” Vicky admits the sadness he feels for denying his parents this pleasure becomes even more acute, knowing the prideful feeling that his own high-achieving children have blessed him with – “pride that no one can take away from me.”

Apart from his university adventures (or misadventures), is a most interesting section of life as a teenager in London which included a night in jail, really a police lockup. There’s also a page on the family’s voyage to London on board the Dutch liner, the Willem Rhys (first class, no less, Tissa Chandrasoma having been recruited to the number two slot in the Shell Company in Ceylon, after he quit the CCS over a disagreement with Prime Minister SWRD Bandaranaike). The ocean crossing included what Vicky calls the “most innocent and true love affair” in his life with a 14-year-old Dutch girl who spoke no English. As he writes, it “was a wonderful love affair which has remained unimpaired in my mind entirely because we didn’t get to know anything at all about each other.”

The anecdotal essays include very readable (also self-deprecating) accounts on his return to Ceylon, a job as an articled clerk in a firm of chartered accountants (“I was not the least bit interested in a career in accounting”) his father fixed up for him at a salary of Rs. 35 a month. Addictions to alcohol and gambling gained momentum in Colombo; “a pretty busy social life, lots parties, drinking, gambling and very little work.” He sat for no accounting exams, gave himself a good time and confesses to “flashy, irresponsible behaviour that leaves me utterly ashamed today.” He drove his father’s head-turner Sunbeam Rapier, ran up club bills as though he was a rich man and had to regularly plead with his mother to bail him out before he was ‘posted’ as a defaulter at the various clubs of which he was a member.

Fast forward through jobs, marriage, children and an aborted attempt to start a new life in Australia. On his return to Colombo, some jobs he did, include a training assignment in Birmingham and Calcutta, some dabbling in the hospitality industry acting as a sales agent in Colombo for an Australian who had leased resort in the Maldives, replete with many amusing yarns of forming a tour company here, having his third child (a girl, the first in two generations of the Chandrasoma family where the score till then score read 12 – zero in favour of sons), before he began working for the Mahaweli Authority. While he does not claim it, he seems to have earned the same respect and affection of Minister Gamini Dissanayake as his father did with Sir John Kotelawela nearly half a century earlier.

When he joined the Mahaweli, his first job was as Project Coordinator, Kotmale Project. His functions had little to do with the Project. They were mainly political, representing the minister in his electorate, liaising with the trade unions and plantation managers, enjoying perks like being assigned a bungalow built for the Swedish engineers working for Skanska which he used as a base during his tours of the hill country. With all its appurtenances and luxuries (clubhouse, squash court, restaurant and swimming pool) and salubrious location, it was a wonderful vacation spot for his family and friends.

When Gamini Dissanayake (GD) discovered his writing skills (typically Vicky downplays them as “better than average”), he was appointed Director, Mahaweli Center in Colombo. In addition to managing the Center, he acted in the capacity of Press Secretary, responsible for publicity and all English language communications, including script writing for both the Minister and the Authority. He was also responsible for the final edit of the ill-fated Indo-Sri Lanka Peace Accord.

Chandrasoma had married a Tamil Catholic from Kayts, “an island paradise in those days,” much to his mother’s horror. Vicky jokes that she committed suicide three times, until a few years after the marriage, when she grew to love her. He tells me that his father’s one comment was, “You realize that marriage is a helluva big step?”. Truer words have never been spoken. He writes affectionately and endearingly about both his mother-in-law and sister-in-law. Despite the later failed marriage, Vicky is able to generously describe his wife thus:

“As it happened, this soft, lovely lady with origins from Kayts, off the shores of Jaffna (an astrologer had once told his mother that he would marry a lady from across the seas) was one I couldn’t have found had I traversed the four corners of the world. A soft and chaste beauty blunted by the harsh, unforgivable reality of a failed marriage.”

I remember Vicky’s wife once accompanying him to the newsroom of the old Ceylon Observer where I then worked, obviously on Gamini Dissanayake-related business. She turned all heads.

Fast forward again, various permutations and combinations of the way politics was played when the Premadasa – Dissanayake – Athulathmudali rivalry for the top slot saw President Premadasa, who had won, moving GD from Mahaweli to Plantations and then taking the Plantation Ministry away from him. GD was thus reduced to a backbencher in 1990. In these circumstances, he decided to leave for Cambridge for post graduate studies in law.

Chandrasoma says, “I believe he was more concerned about the health of his body than the development of his mind. Before he left, he advised me, in the interest of my own continued good health and safety, to duck out of sight for a while. I applied for six months’ paid overseas leave from the Mahaweli Authority, a privilege available to Mahaweli executives. I then obtained a tourist visa to the United States and headed to Los Angeles with a couple of thousand dollars in my pocket.”

He writes of GD: “I could not have imagined a kinder and more compassionate boss, one who could get the best out of the people who worked for him, with encouragement and approval. Personally, he gave me the opportunity to redeem myself after a lifetime of wrong choices, and made me feel that I was making a significant contribution to the welfare and democracy of our country.”

Before I close, a word on Chandrasoma’s newspaper essays over the past few years that are a part of this book. Very conscious of what America has done for him and his family, and the fact that his children and grandchildren will continue to live and flourish there, he does not hide his abhorrence of Donald Trump, white supremacy, slavery, and the treatment of coloured people in the USA. These views have all been forthright, and the undeniably hard punches he has thrown are very much the result of deeply held convictions. While I have no doubt that like-minded readers (do we find any Trump aficionados in our country?) would have enjoyed his commentary, I believe that it will be the personal part of this volume that will draw the most interest.

The story continues to Los Angeles and Phoenix, Arizona, 1990 to 2009. It covers a lot of ground, all of it most interesting and eminently readable. But I will not take away the pleasure of reading it all from the many who will relish it. However, there has been a very limited print run and it probably will not be freely available in the bookshops.